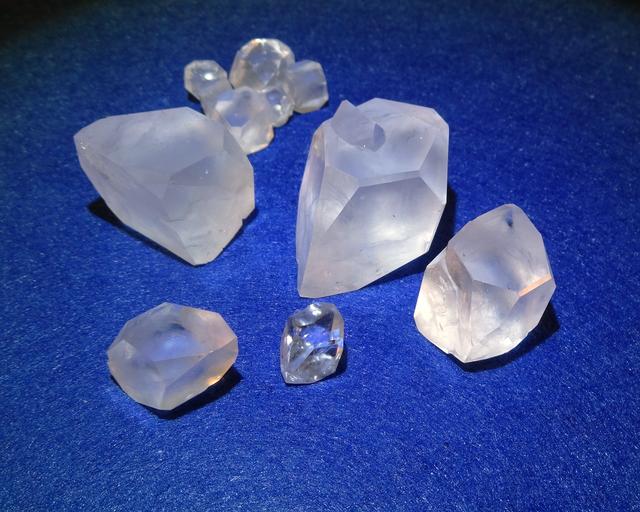 Sulfates are salts of the sulfuric acid H2SO4. Many of them are a good material for growing crystals, because of their stability and solubility.

There are many sulfates that have 2 different metals in it, in stoichiometric proportion. They form several families of similar compounds. Tutton's salts are compounds of general formula: MI2MII(SO4)2·6H2O, where MI and MII stand for univalent and bivalent anions. In mineralogy, they are called schoenites.

Bloedites are similar to Tutton's salts (schoenites), but have 4 molecules of water instead of 6. They also can include Na ions.

Alums are the family of similar double sulfates of general formula: MIMIII(SO4)2·12H2O, where MI and MIII stand for univalent and trivalent anions. MI is usually one of K, NH4 but can be other: Na, Rb, Tl. Trivalent metal MIII is usually one of Al3+, Fe3+, Cr3+.

Salts of acetic acid. Most acetates are soluble, but few of them are suitable for growing nice crystals.

Salts of nitric acids HNO3. Most of nitrates are extremely soluble in water and deliquescent, which makes them badly suited for growing.

Alumooxalates are salts of the complex anion [Al(C2O4)3]3+. They are colorless crystalline solids.

Ferrioxalates are salts of the complex anion [Fe(C2O4)3]3+, they have beautiful green color, unusual for iron (III) compounds. They are slightly light sensitive and must be stored in dark place.

Sulfamic (also known as amidosulfonic) acid is a moderately strong inorganic acid HSO3NH2. Its primary household use is a descaler agent. Unlike sulfuric acid, it is solid. Almost all sulfamates have extremely high solubility.